This piece was originally published on February 16, 2016 on the Nonprofit Pro blog.

A few years ago, Omar Mahmoud, chief of market knowledge for UNICEF’s private fundraising and partnership division, presented at the United Nations on the topic of corporate/nonprofit partnerships. Corporations are increasingly partnering with nonprofits to boost their credibility and trust, and the conference was designed to help nonprofits become more brand-savvy as they build collaborative programs with private sector businesses.

After a few slides highlighting the expected corporate mega-brands, Mahmoud, who worked at Procter & Gamble before he joined UNICEF, shifted gears into less expected territory. He talked about the brands of icons like Barack Obama and  David Beckham. Next, he shared an example of India’s campaign to rebrand the  entire country to encourage tourism and investment—which included training  everyone from customs officers to taxi drivers—in order to change visitor perceptions and influence tourism. Lastly, he covered nonprofit brands like Greenpeace, Amnesty International and beyond.

In more intimate settings, Mahmoud prefers to illustrate the power of branding by asking people whether they prefer Coke or Pepsi, then giving them a blind taste test. This experiment regularly highlights the difference between a brand and a product; often the brand consumers say they prefer is not the product they say tastes better.

“The same thing can be applied to fundraising,” said Mahmoud. “If you send the same mailing under different organizations’ names, you’d get different results.”

Years ago, branding was considered the purview of corporations alone. But in recent years, branding is increasingly considered a useful strategy for nonprofits, too—particularly those that are struggling to distinguish themselves from peers when competition for donors, members or clients heats up.

But what does the word “brand” mean for nonprofits today?

Branding Defined
Branding is, first and foremost, about perceptions. Your nonprofit has a brand whether or not you have a fancy logo, a snappy tagline or a style guide. In every interaction, you’re shaping perceptions, deliberately or accidentally.

Branding (or rebranding) an organization involves proactively and deliberately trying to shape or influence perceptions. Doing so requires understanding how you’re perceived, defining how you want to be perceived, clarifying how you communicate to make sure it’s heading in the right direction, and communicating consistently. Branding isn’t a one-time proposition. It’s an ongoing process.

The Elements That Make Up Your Brand
There are certain elements that most experts agree represent a brand. These are often the elements they review, refine or create in a rebranding process. For instance:

Ever have a bad customer experience that makes you swear you’ll never shop in that store again? That’s a brand touchpoint too.  Experiences, just as much as elements we see, hear and read, shape our perceptions about brands, but are often overlooked when a nonprofit considers rebranding.

Staff interactions, office culture, technology (for instance, your voicemail system or website) and physical spaces (for instance, how friendly and welcoming your office is) are elements that can also have a big influence on how your nonprofit’s brand is perceived.

After the Auburn Theological Seminary rebranded in 2010,  it elected to redesign its annual fundraising breakfast, “Lives of  Commitment,” to be more consistent with the brand it was trying to create. The event honors women from diverse religious backgrounds who are all powerful agents of social change. In years past, honorees were each given a small potted ivy plant, symbolic of Auburn’s  history. To be more consistent with its new brand, Auburn’s staff  created a new ritual of pouring water over each honoree’s hands  using a vessel inscribed with its new tagline: “Trouble the waters, heal the world.” The effect was profound; event attendees now felt they were observing a ritual of deep significance. 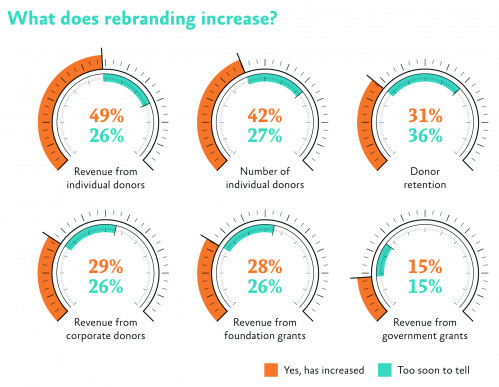 What Is a Brand Strategy?
Successfully changing how your nonprofit is perceived begins by gathering insights from the audiences you need to communicate with. Wildlife Conservation Society (WCS) is a conservation  behemoth, managing hundreds of projects in more than 60 countries and educating millions of visitors through its Bronx Zoo and New York Aquarium. After strategic planning, WCS engaged agency Wolff Olins to help it translate its new plan into a more consumer-friendly brand strategy.

“WCS has beloved, nationally recognized assets like the Bronx Zoo, while our parent brand, which has a global conservation focus, isn’t as well-known among U.S. audiences,” said Bertina Ceccarelli, executive vice president for global resources for WCS. “Our goal was to bring it all together into one brand strategy and organizational voice that consumers find powerful and feel inspired to support.  “The leap was to view our work from the outside, not the inside. Internally, we pride ourselves on our exceptional commitment to science and delivery of conservation results, but we haven’t always understood fully how consumers, donors and partners see the uniqueness of our work.”

The organization conducted surveys, interviews and panel discussions to surface the perceptions of audiences ranging from staff, partners in the conservation world, individual and corporate supporters, trustees, activists, zoo visitors and more. “We Stand for Wildlife” emerged as the connective tissue, and it became WCS’s new brand position.

“Everything we do throughout this organization flows back to that single idea,” said Ceccarelli. “A strong brand further strengthens your ability to do your mission. While it can be hard to break out of the internal set of memes, WCS will ultimately be more successful in raising awareness and support if our brand connects to our audiences both intellectually and emotionally.”

WCS is rolling out new logo, visual, messaging, website and other brand elements at the end of 2015, all of which derive from its new brand strategy, “We Stand for Wildlife.” The organization commissioned Pentagram, an international design firm, to create the new brand identity.

A brand strategy is key to translate the nuts and bolts of your organization’s strategic plan into tools that will help you communicate. Talk to a dozen firms that do branding work and you’ll hear terms like “brand essence,” “brand connector,” “positioning” and “personality” bandied about. These are all different approaches to brand strategy, and when done well, they should define the tone, style and basic understanding of what your organization should be.

The best brand strategies are simple, clear and distinguishing from others in your space. If your new brand strategy could work just as well for a peer organization that may also be courting your donors, consider pushing it further. Charity: Water, for instance, quickly distinguished  itself in the clean water movement from organizations like WaterAid or Water for People and raised significant funding by differentiating itself as a fun, youthful, hip organization.

Visuals and Messages
The term “branding” emerged from the ranching industry, when  cattle were branded to make sure their ownership was indisputable.  For this reason, people often associate branding with logos, and consider a change in logo to be rebranding.

While many organizations do elect to change their logo when they rebrand, changing only a logo may not shift how your organization is perceived. Often, changing other visuals, such as the colors, typefaces and images you use, can be just as significant.

The best logos are simple, flexible and timeless. While it’s tempting to try to pack everything and the kitchen sink into a small mark, it’s often less effective than something that’s simple enough to work on your website, as a social media avatar, in large signage on your building or at your event, and on your business cards. Think of Target’s simple bull’s-eye, Coca-Cola’s timeless typography or the bold clarity of FedEx’s logo.

While logos are commonly used and understood, many nonprofits struggle to understand and define their messaging, which can be inherently more complicated. Messaging starts with an organization’s name and tagline. Are they clear? Memorable? Does your name work well in URL form or when abbreviated? Your organization’s name is often its most widely traveled ambassador. But it’s not just about your name—your vision and mission statements, values key messages, boilerplate copy and elevator pitch each serve a distinct purpose, and must function together and separately.

Most organizations create brand guides, often called style guides, which include the organization’s brand strategy, visuals and messaging, and usage guidelines. Staff, particularly those who communicate externally on behalf of the organization, will likely need to be trained to use these elements, too.

Day-to-Day Brand Experiences
Camber Collective’s recent “Money for Good” 2015 report flags that donors react to “noise” by maintaining a high level of loyalty to their primary causes, and by exhibiting a preference for well-known nonprofits.

Turns out, donors are more likely to give to an organization they’ve heard of. That makes penetrating the noise with credible, authentic communications all the more important for nonprofits.

JetBlue’s hub at John F. Kennedy International Airport in New York has free Wi-Fi and stores that feel consistently aligned with JetBlue’s  image. There are casual spaces to sit and snack, and digital conveniences everywhere—an airport for the modern traveler. That’s the essence of what JetBlue wants consumers to associate with its brand.

Creating experiences that allow key audiences to “live the brand” takes creativity. City Year works to bridge the gap in high-poverty  communities between the support that students need, and what their schools are designed and resourced to provide. Its AmeriCorps members  are given bright red jackets emblazoned with the City Year logo and a colorful patch, and are regularly photographed in the field “in uniform.”

Many organizations paint their values prominently on the walls, or even print them on notepads, inspiring staff to keep them top-of-mind.

What Makes a Brand Great?
Branding and other communications are strategies that should help  advance your organization’s work. When a nonprofit’s strategy, visuals and messages are also reflected in the culture of its work and the experiences its audience has, greatness emerges.

The strongest brands in any sector are consistent, authentic to the work itself, and reflected not just in marketing materials, but in just about everything the organizations do.

But Is It Worth It?
“The Rebrand Effect,” a study by Big Duck and FDR Group conducted in 2014, showed a strong correlation between rebranding a nonprofit and increased revenue, recruitment, media attention and staff confidence. But timing is critical, too.

The best time to change your brand is often after a change in leadership (e.g., when that new executive director starts, not just before they leave) or right after strategic planning. Whatever you change, particularly if it’s an improvement, should inspire staff and board alike to communicate in new ways.

Cure SMA, a national organization that needed to attract donors who weren’t directly affected by the disease, nearly doubled its income at year-end 2014 using its new brand. Timing was everything—staff used the new visuals, messaging and story to engage existing and new donors, generating a 43 percent increase in the overall number of gifts.

Embarking on a rebrand is a lot like renovating your home. It will take time, cost money, and require careful planning and implementation. Tread carefully: It’s better to wait, build buy-in from your board and staff, and make sure there are no derailing changes in leadership or huge changes coming first.

Sarah Durham is the Founder, Board Member at Big Duck